Believe it or not, I was elated when I arrived out at the swim site. Although the air temperature was a crisp 27F, the waves had subsided considerably from yesterday, and there was no wind whatsoever. So we had a pretty calm lake to swim in with just some very mild rollers.

The water temperature came in at a cool 34F which meant that it was actually warmer to go swimming than to loiter around on dry land. Carol and her husband Paul arrived shortly after I scoped out the swim site, and we suited up in the parking lot. Paul shot a bunch of video clips which we plan to use for our Suit Juice video. (BTW, big kudos goes out to Paul for stepping up and manning the cameras!).

Carol and I descended into the icy lake water and swam out to the 1/8 mile mark. The wetsuits and thermo gear were holding out okay, but the water was pretty intense on the exposed areas of our face. We opted to do a quick-paced 1/4 mile and then horse around a bit by Ladder #1. But one thing is clear – Carol officially joined the ranks of the much-coveted sub-35F club! (congrats!)

Here are a few shots of this morning’s swim along with a rather entertaining video clip. As you can see, we try not to take ourselves too seriously! 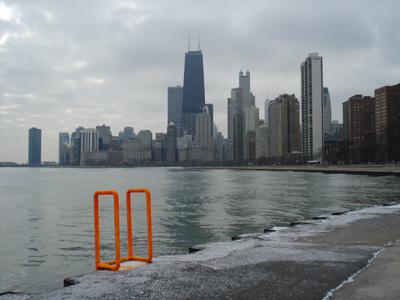 Carol and yours truly 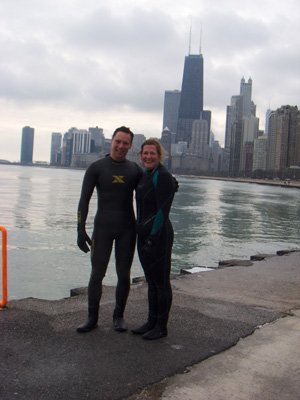 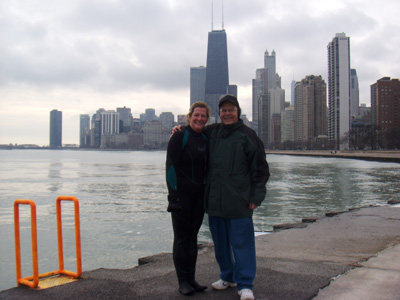