The North Channel is the 35K stretch of water between Northern Ireland and Scotland.  In history, only 9 swimmers have ever accomplished this channel crossing. The first successful crossing was in 1947. 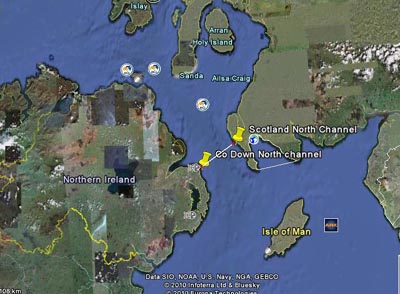 As challenges go, it is a body of water that requires the utmost of respect. Above both the countries we have thousands of miles of sea, all raging and wanting to run south and north. When this water tries to squeeze between the 2 countries, the space being so small forces that water to act very erratically. As the water runs through islands and in and out of headlands and bays, it goes every direction. Therefore, to a swimmer, there is no definite system of movement.

The tides running through Rathlin Island work on nine hours and not the usual six. The erratic nature of these flows is why this stretch of water is the most respected. Add to this the fact that the water temperature is only 12 degrees C (late 50’s in F).

There are those older than us who would be happy if we let this water be. But there are the heroes within our group who decide to battle. Annemarie Ward is such.

Difficulty and challenge is not something that she recognises. She sees arm over arm and most importantly has the most highest level of trust in the crew who this year have assembled around her. During our relay around the Ireland in 06, this group spent years with us in preparation. They worked with swimmers at the lowest ebb of energy, and they pushed us when we were going backwards. Their own personal knowledge of the sea and it’s movements make them the best possible crew to make this happen.

As a team they travelled a few times to the North Channel to swim before the attempt. They studied its form, watched the water, and felt its heartbeat. It is very important to know the agressor.

One day a few weeks ago, they popped Annemarie in the water ten miles from shore. She swam solid for 2.5 hours in the north eastern flow. It was a super successful swim for the crew. Despite rotating her arms for two and half hours, she was in the same place as they started. It was a successful day for the crew because they understood the timing when the flow may not be crossed.

In 2008 Annemarie took her first outing. The weather changes quickly in September, and after 17.5 hours swimming in the North Channel – despite being close to Scotland – the crew made the heartbreaking decision to take her from the water.  Her body was being turned back to Ireland. She was fine physically, but would the next two hours hurt her more? 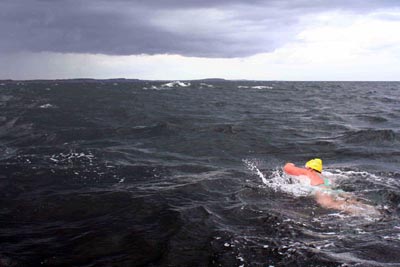 In 2009 Annemarie went back again, and this time the weather and a few decisions forced her out of the water after 2 hours.

Last Tuesday night, Aug 3rd, Annemarie got into the water off Gobbins Island at 10:15pm (the water is calmer at night). She was accompanied with a hardboat and 2 RIBs with Brendan Proctor and Derek, the 2 main marine coordinators. Also along were Team Delta – four guys Ivan, Gus, Joe and Eoin – as well as Noel who trained with her all winter.

The first hour she encountered many jellyfish, taking the stings as she kept moving. The third hour she took in some painkillers in the hope of easing the pain, more devasted that the progress was being hampered. Pain over Progress?  The plan was so accurate that the jellyfish were the only negative.

The water was welcoming and calm. The crews despite the darkness were able to identify the blooms, trying to alert her about going right or left.  But despite these efforts, the crew had to stand by and watch as more and more stings covered her.

Over the five hours Annemarie hands and legs swelled up and her joints locked. Her leg kick slowed as her ankles and knees seized up. Her mouth was covered in stings. At five hours she made the call herself and knew that it was over. For precaution, she was admitted to hospital. All is well, a few tingles remain, but the team is back in planning.

It is so heroic that a swimmer, despite all the pain, can think only about letting the crew down – and how the crews can be so disappointed about letting the swimmer down. Life is so amazing, and being part of these experiences makes life so much more special.

The work is done, and the North Channel still waits. Hopefully in the coming weeks…

From a personal point Annemarie is one of the funniest and most gracious swimmers. The moment she puts her face in the water, it is for all the right reasons. She is completely at one there.