I won’t candy coat anything. It’s getting cold – both inside and outside of the water. But the Lake Monsters are geared up and out in force at Ladder #1…

The air temperature came in at around 55F which was the high point of the day from what I understand. The lake came in at a cool 52F and the absence of any wind made it a veritable sheet of glass. I stepped up the thermo gear to include a neoprene hood and gloves, the latter providing extra protection on my neck which made a world of difference both during and after the swim. However, the 3mm neoprene foot covers didn’t do as good of a job protecting my feet as they had during the warmer temperatures. Next week’s set up will be essentially the same, but I plan to add 7mm neoprene diving shoes and a free diver’s mask. Since the rest of the equipment performed flawlessly, this set up should be quite effective in the sub-50F range.

For such a chilly scenario, though, we had quite a turnout at Ladder #1. Diver Dave and Chris were there along with John Dickinson, who’s in town from Kentucky. We all did the out-and-back to Oak Street Beach without any difficulties, and the water, as mentioned earlier, was completely calm. By the time we were finished, the sun had crested over a cloud bank and warmed things up considerably. At about the same time, the Ochoa brothers made an appearance after their morning run and took turns jumping into the bracing waters in just their running shorts (brrr….) 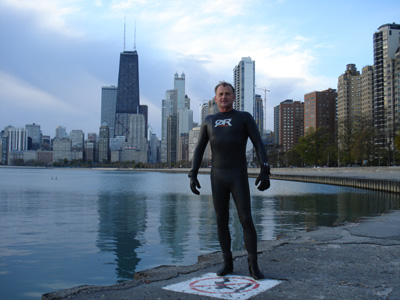 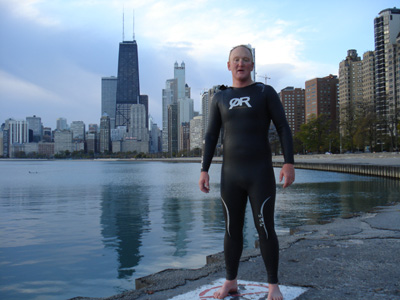 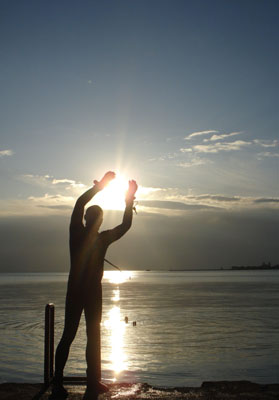