This was one brutal swim…

The sun had already risen by 7:00am thanks to the extra hour we gained last night. I caught up with Dave at Ladder #1 who was measuring the temperature of a very tempestuous Lake Michigan. I was wearing my wetsuit when I arrived, so I didn’t mind it as much when the swells crested the edge of the embankment and drenched everything.

The water temperature came in at a crisp 48F, and I was really glad I was wearing my new 7mm diving boots. This was going to be one cold dip in the lake…

While Dave and Chris were retrieving their stuff, new Lake Monster Ashley arrived to partake in the Ladder #1 festivities. Ashley is a graduate student at Northwestern’s Medill School of Journalism, and she has quite a substantial background as an open water swimmer. She wanted to join us for a swim and chronicle the Lake Monsters in a feature story for the school. And given that we’re all pretty much pathological attention-seekers (in a healthy sort of way, of course), we heartily agreed.

The four of us scampered down Ladder #1 and plunged into the drink, and MAN ALIVE was it chaos! The chilly waters were manageable, but the heavy swells just knocked the hell out of everyone right from the start. Proper swim technique pretty much went out the window as we instead switched to “triage” mode – i.e. short quick strokes designed to establish some sort of forward movement. We had to be careful not to swim too far away from the embankment in case we needed to get out quickly. However, we also had to keep a safe distance from the retaining wall or risk getting pounded against it by the heavy swells.

I bailed out about one third of the distance to Oak Street Beach to catch my breath for a bit. I was wearing a new Cressi free divers mask that covered everything but my mouth. And while it worked wonders in protecting my face, it also translated into many unanticipated gulps of cold lake water.

When I jumped back in, I resumed swimming at a much more relaxed pace. I had already decided that this wasn’t going to be an “out-and-back” swim, so my new goal was just to make it to the beach. I swam within 200 yards of Oak Street Beach and noticed some pretty vicious waves breaking against the embankment. So I veered out farther into the lake in order to avoid the heaviest of this surf. I was pretty spent at that point, and visibility was essentially nil in the water. But I knew I had made it when I finally “hit bottom” on my swim stroke.

I made my beach landing and started working my way back to Ladder #1 on foot. I kept a real brisk pace because I was already feeling a fierce afterdrop kick in. The first third of that trot was pretty much spent in a cold-induced fugue state. I remember seeing Julie, an occasional Ladder #1 visitor, who called out to me from the lakefront path. I answered her, but everything was moving in super slo-mo. And I couldn’t talk much because my jaw was cramped shut due to the combination of cold water exposure and the perpetual snarl I had on during the swim. (Sure sounds like fun, huh?)

When I reached the swim area again, the Ochoas had arrived and were taking their ritualistic post-run dips in the lake. I broke out the longjing tea and started slicing up the now-traditional pineapple. My hands were so shaky that Dave commented that it looked like I was using an electric knife. I made sure to lace my slices with fairly ample helpings of Barbancourt 15…

All in all, another high adventure out at Ladder #1. It was still early when we finished up, but everyone would agree that we all accomplished one heck of a lot during that short time in the water.

Below are my shots of the day. Dave and Ashley have some more that I’ll post as soon as I get them. 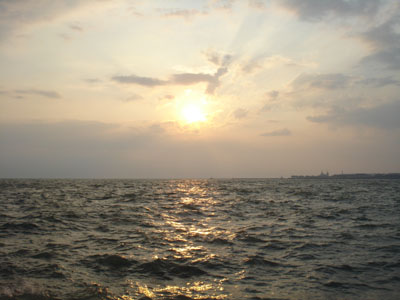 Ashley, Chris, and Dave in a pre-swim huddle 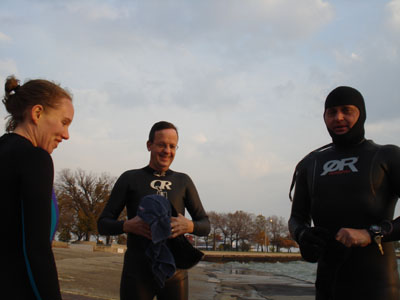 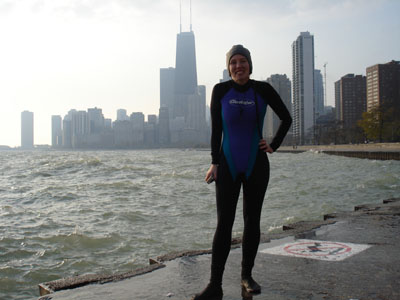 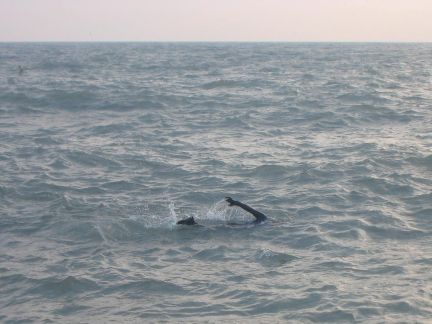