People sometimes raise an eyebrow whenever I tell them that it’s actually much more difficult to swim in December than it is in January. The reason for this is that you have to overcome tremendous physical and psychological resistance this time of year – all internally generated by a brain that seems hell bent on keeping you out of the water by any means necessary.

Eventually, though, your repeated forays into the harsh elements send a strong signal to your stubborn noggin that “the beatings will continue until morale improves.” So at that point – usually some time in early to mid January – the role of your brain transitions from “let’s keep this tomfool out of the water” to “let’s preserve this tomfool in the water – since he’s obviously continuing a pattern with no apparent end in sight.”

We haven’t quite made it to the second phase yet, so yesterday’s swim was most certainly a challenge…

Last weekend’s mild temperatures turned out to be very short-lived as Old Man Winter decided to show up early and make himself at home right at L1. Yesterday’s air temperature at 7:00am was a biting 26F, and the surface lake temperature shattered the 40F floor, coming in at a bone cracking 38.1F.

But four of us still made the pilgrimage out to our coveted swim spot. So for better or worse, we were committed to getting in a swim!

I went with my neoprene winter gear set up from last year – short sleeve top, shorts, hood, gloves, booties – along with overly generous portions of shea butter on my exposed forearms, legs, and face. But even with all this layering, it was still pretty harrowing for the first couple of minutes in the lake.

By the time I had reached the 1/8 mile point, everything was fine. The only glitch was that my right goggle lens was leaking a bit, giving my right eye a constant cold water soaking with every swim stroke. So while I could have done a full 1/2 mile, I turned back and ended up with just under 1/3 mile like last week.

Post-swim was the big challenge as I had not planned my wardrobe well. Instead of loose fitting sweats, I had opted for running tights that proved to be very difficult to put on with frozen clubs for hands. Bottom line, it took a bit longer that usual to get into my warm civilian clothes – and every second is critical this time of year!

The walk back to the car was a quasi-fugue state as the afterdrop started to ramp up before I even entered the pedestrian tunnel on the other side of the bike path. It didn’t help that I wasn’t able to find parking closer than Clark Street. So I was incredibly relieved when I finally got in my car and cranked up the heat.

It took about 15 minutes before the shivering reduced to a level amenable to operating a motor vehicle. But when it was gone it disappeared for good.

So hopefully I’ve sped up the acclimation process this season!

A new skating rink around L1 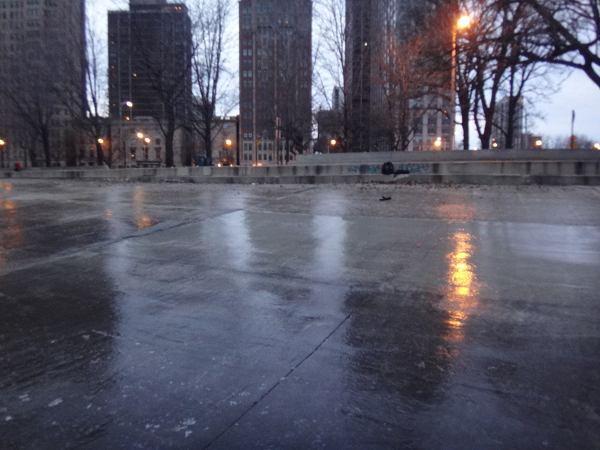 Gearing up in the cold 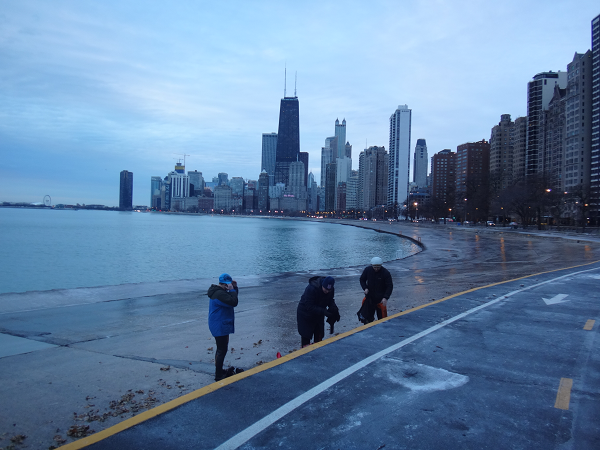 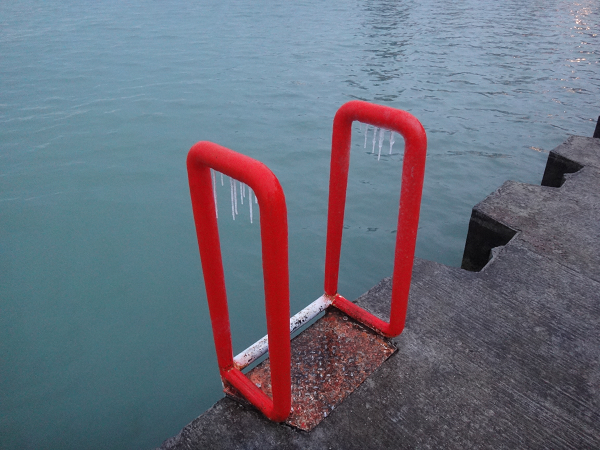