Having the alarm clock sound off at 4:30am on a Saturday morning doesn’t make much sense to most people. And if you tell them that you’re doing so in order to swim a mile in 56F lake water, you’re bound to get some very strange looks. But the sunrises are astounding this time of year, and the spring swims are by far the most memorable.

I took out my camera to get a few shots of the awesome sunrise from Lincoln Park, and I was horrified to discover that my camera battery had run out power. After vitriolically cursing of the gods of irony, I rode down to Ladder #1 and found Chris already there. Carol joined us a few minutes later as did new Lake Monster Danny.

The water was calm and clear and came in at a crisp 56F. I was testing out my new Xterra fullsuit, and Chris and Carol opted to go with wetsuits as well. Danny and Amanda (who arrived later), however, did their swims in just swimsuits. I’m working my way up to that, but I may have to reach the 60F mark before I go the distance in just my jammers!

Post-swim was a fun celebration as always. There was plenty of hot tea and good conversation to go around, and we were all happy that we got in a swim before it became overcast again. See what you missed out on? 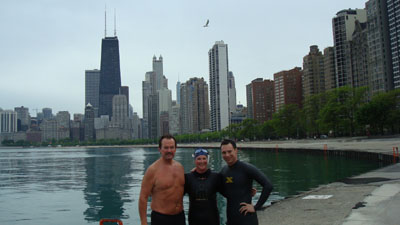