The sun rose at 5:16am, and I made it out to Ladder #1 just in time to catch the show. I had to clean up some trash around Ladder #1 that some vile picnickers had left the night before. I wonder if they do these things in their own homes? My guess is yes…

While Chris and I were snapping shots of the sunrise, Dave honked at us from Lake Shore Drive and showed up a few minutes later. The lake was somewhat wavy with some slow rollers coming from the north east. But the water temperature was a lukewarm 57F, and the water itself was clean and clear.

Dave and I headed out first and made it to Oak Street Beach in 15 minutes. The return leg took an additional 10 minutes with probably five of these spent trying to escape the incoming surf at the beach. Once out of its grasp, though, it was a textbook half-miler.

We also ushered in a new Lake Monster this morning. Carla came out again and decided to turn a “quick dip” in the lake into an extended swim – without a wetsuit. Way to go Carla! 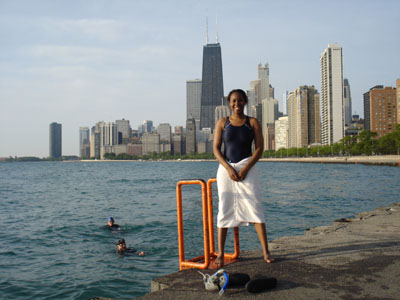 See what you missed out on?