Given the frigid 17F air temperature, we decided to head out to the Montrose south wall in lieu of L1. And as it turned out, that was the best thing we could have done!

I met up with Mike and Marton out at MSW just before sunrise (7:00am). We scoped out the swim area, and there was a sheet of ice extending from the wall out about 6 feet. However, there was an enticing a patch of open water just beyond.

As we deliberated how we were going to punch through the ice, a northeast wind miraculously arrived and started to blow it all south. Talk about great timing!

We suited up as quickly as possible and climbed down into the lake. We swam east, slightly into the wind, and made it about 1/5 mile before heading back. The return half of the swim was a bit more challenging due to all the ice forming on our gloves, booties, and hoods.

But that’s what happens when you swim in a 32F lake that is literally in the process of freezing!

The most brutal part of the swim was actually getting out of the water. By the time we exited, we had snow added into the 20mph sustained wind – all of which created a veritable blizzard in the parking lot. In fact, the below-zero wind chill froze all the water on our neoprene making it next to impossible to get our gloves off.

I furtively clawed at my right glove for about five minutes before I was finally able to free my right hand. It was only then that I could get my keys out of my jacket and get access to my car. I didn’t even bother trying to get out of my frozen wetsuit – I just got in, slammed the door shut, and cranked up the heat!

With a little logistical difficulty, I changed out of my frozen neoprene in the front seat and got into some dry clothes while the car warmed up. I didn’t have much of an afterdrop this time (thank goodness), so it was a pretty uneventful ride home.

Once again, we beat the storm!

Marton prepping for a swim 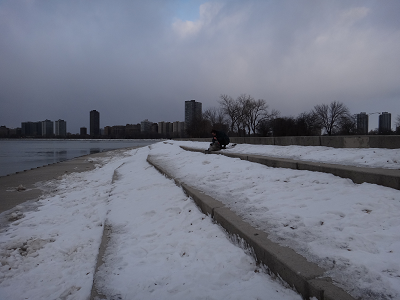 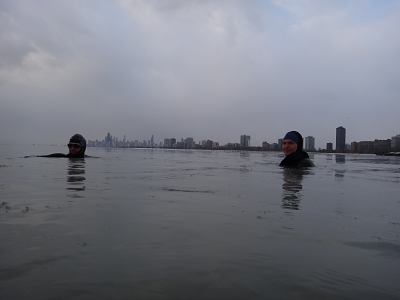