I arrived at Aquatic Park at 5:15am, and I was 100% ready to jump in the water immediately. One hour before, I had begun my swim preparation with a progressive cold shower ritual, and my body was already in “race mode.” The pre-swim cold water immersion had jump started my core, and I could tell that my body had already shifted the blood away from my extremities.

This made a HUGE difference both physically and mentally.

At 6:55am, we boarded two ferry boats and headed towards “The Rock.” About halfway there we were given the official numbers – the outside air temperature was a crisp 55F, but the water temperature was a surprisingly balmy 60F. I chatted with a number of first-time Bay swimmers on the ride out to the exit point, and they peppered me with questions about what to expect. I gave them some pointers, but I also told them that 60F with a wetsuit was really nothing to worry about. They didn’t seem convinced…

At 7:15am, we all lined up and began jumping three-at-a-time out of the ferry exits. When I came to the front of the line, I spotted an empty patch of gray-green water to the right and leaped in. Much to my surprise (and delight), I had no immersion shock whatsoever. I remember yelling to the others still in the boat that the water was “not bad at all” before letting out a whoop and swimming the 200 yards towards the start area.

At 7:20am, the race director sounded off the starting horn, and the whole pack of swimmers whipped up the water in a mad dash to Aquatic Park. The currents were quite mild at that time of the morning, so we all stayed pretty close together for much of the swim. We had our usual “rugby scrum” moments of close quarters swimming, but there was always a clear patch of sea to dart out to if you wanted your own space.

As mentioned earlier, the cold water really wasn’t an issue for me. I kept a fairly brisk pace throughout the swim and focused on technique. Unlike previous triathlons, I opted to use my legs more and kick out a higher swim pace. I knew this was risky, but I was feeling pretty good. Besides, I had forgotten to set my stopwatch, so I no longer had the option of monitoring my progress accordingly.

I sighted just to the left of Aquatic Park and managed to stay in the middle of the pack for most of the swim. The currents blew the “peloton” apart halfway through the race, but not enough to place anyone off course. Still, I found myself at one point doing a solo stretch with no one near me for 50 yards in either direction. Knowing that marine predators often zero in on “outliers,” I began to experience a rather profound sense of unease at what might be circling underneath me in the murky waters.

This definitely helped me step up the pace…

I reached the narrow aperture at the entrance to Aquatic Park and was quite swiftly rewarded with a sudden mouth/lungful of briny Bay water. I had a perfect record of avoiding this unpleasantry so far, but I knew this was an eventuality. So I went through the normal ritual of stop, tread water, dry heave, adjust goggles, and soldier on that I did in previous Bay swims. But let me tell you something folks – I’ve NEVER gotten used to this experience…

I hit the beach approximately 40 minutes after “jumping ship” and had enough sense to tear off my cap and goggles while still crouched in the water (see photo op post). I then sprinted to the swim transition area and doffed my wetsuit in preparation for the 2.5 mile “warm up” run to the bike transition area.

Overall, it was an excellent swim with fantastic results. Besides my pre-swim preparations, I also had the advantage of having trained in colder, fresh water conditions. This gave me a unique advantage over many of the other swimmers. Given the buoyancy of the salt water, I was able to blaze past other swimmers with much less effort.

Bottom line – if you train in the Great Lakes, you can easily do a swim like this.

Stay tuned for the bike and run reports. In the interim, here are a few SF shots of the venue taken the day before: 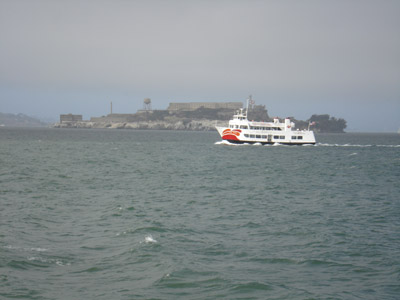 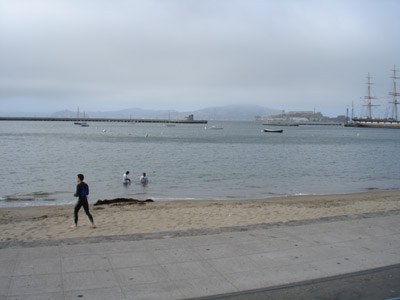