There’s an interesting piece in last weekend’s New York Times which profiles the lifestyles of a group of 20 to 30-something urbanites who have embraced a hunter-gatherer type lifestyle amidst the modern trappings of the big city. Here’s an excerpt:

The caveman lifestyle, in Mr. Durant’s interpretation, involves eating large quantities of meat and then fasting between meals to approximate the lean times that his distant ancestors faced between hunts. Vegetables and fruit are fine, but he avoids foods like bread that were unavailable before the invention of agriculture. Mr. Durant believes the human body evolved for a hunter-gatherer lifestyle, and his goal is to wean himself off what he sees as many millenniums of bad habits.

The article references Arthur DeVany, one of the most prolific proponents of this lifestyle. It’s definitely worth reading. And it’s hopefully much more than the “new age” fad that the NYT seems to insinuate. 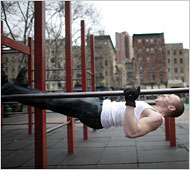