Believe it or not, at one point we had three nuclear missiles deployed on our lakefront right in the midst of some very densely populated areas.

It all began in 1957 during the height of the Cold War. At that time, the greatest perceived threat to the U.S. was a nuclear attack from Soviet bomber planes flying over our cities. To counter this threat, the U.S. military deployed the Nike-Ajax – and then later the Nike-Hercules – surface to air missile systems (SAMs) at numerous locations throughout the country to serve as a protective shield against such an attack. These missiles actually contained nuclear warheads and were designed to obliterate clusters of enemy bombers through an atomic air burst.

As the Cold War raged on, both the U.S. and the Soviet Union developed intercontinental ballistic missiles (ICBMs) which could be launched from distances greater than 3,500 miles (5,500 km). Both superpowers, in turn, developed ICBMs which could (in theory, at least) intercept incoming enemy ICBM strikes.

This particular site was right in my neighborhood near the Belmont exit off of Lake Shore Drive (the photo says Montrose Beach – which was where the control center was located – but the actual missile was farther south at Belmont): 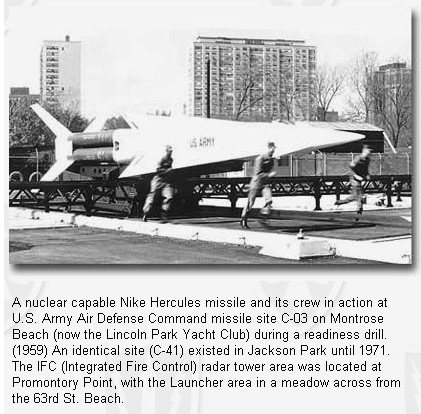 There was also one deployed just south of McCormick Place and a third one in Jackson Park. In fact, the radar towers for the Jackson Park site were located on Promontory Point, one of our sister swim sites: 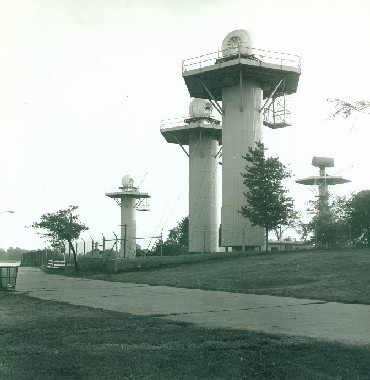 For a more detailed look at the Chicago Nike-Hercules missile sites, be sure to check out Michael Epperson’s site (where I got the images).

And while this is now all just a historical footnote, we could have experienced this right on our lakefront during the Cold War!