The days are certainly getting much shorter…

I arrived at Ladder #1 just shy of 6:30am, and it was essentially still evening. There were a few traces of daybreak on the eastern horizon, but not enough to provide much light to see anything. The water temperature came in at a surprisingly balmy 60F, and I opted to ditch the neoprene cap in favor of the thicker latex swim cap I used during last year’s Golden Gate Bridge Swim – which was almost exactly a year ago.

The immersion shock was minimal, although my feet were quite cold from the get go. This was probably due to the progressive cold shower I took 45 minutes prior to hitting the water. My body was primed to keep all the heat in my core, so having cold extremities was more of a necessary inconvenience.

The swim itself went great, but there were some intense swells at that time of the morning. I opted to remain closer to the wall for the first half of the swim just in case things got too chaotic. But even with all the heavy buffeting and occasional mistimed breathing (read: lungful of lake water), I was able to sense the rhythm of the waves and adjust my swim strokes accordingly. The real key was making a conscious effort not to fight the waves, but to simply relax and work with the forces of nature versus against them (I’m sure there’s a Taoist metaphor here somewhere…).

I made my now traditional landing at Oak Street Beach and took a few moments to check out the newly rising sun. There were a handful of early bird sunrise watchers at the beach, and I chatted briefly with one of them before diving headlong into one of the crashing waves on my way back to Ladder #1. It was still pretty tough going, but at that point I had internalized the lake’s rhythms – which translated to much more efficient swimming.

I clambered up Ladder #1 completely spent, but elated beyond words when I turned around to face a magnificent autumn sunrise. Talk is cheap. Here are the shots…

The beginnings of a day 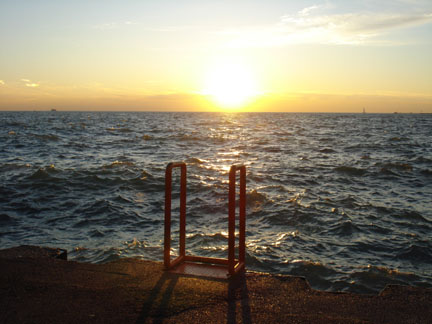 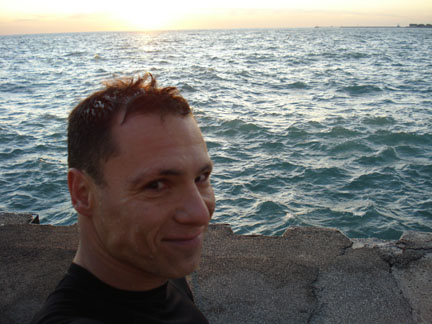