It was somewhat of a late night on Saturday, so I didn’t make it to OL#1 until 7:30am. The Ochoas were already out there – as well as the infamous the aluminum ladder – but the energy level was a bit more low key. There was a slight chill in the air that dissipated as the morning progressed, but it served as a subtle reminder that the days are getting shorter. However, for the purists out there, I do need to emphasize that summer doesn’t officially end until the autumnal equinox on September 22.

There was actually quite a lot of side activity going on in the area. The Red Bull Flugtag had taken place the day before, and the roped off section of the lake by the north wall was littered (pun intended) with the remains of all the hapless flying machines that had crashed into the drink during their glorious but ill-fated journeys. It sure looked like they had fun!

The water temperature came in at 65F, and I opted to go with the thermo shirt. I probably would have been fine without it, but I didn’t do any pre-swim cold water preparation that morning, and I hadn’t had much to eat during the previous 12 hours. As an FYI, sleep and food intake can significantly affect your body’s ability to thermoregulate. Keep in mind that your physiology is always in a state of flux, and what might have been tolerable the week before might not be under varying circumstances. So be prepared to make adjustments on a constant basis.

Enough of my pontificating. The day turned out great, and I got some kayaking in to boot. And as I’ve said countless times before, if you slept in that day you missed out! 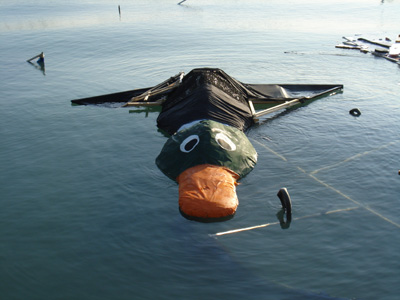