When people find out that we go swimming in water temperatures as low as 50F, the most common opinion seems to be that it is both “crazy” and “dangerous” to engage in this type of activity. However, I would argue that we are genetically designed to flourish better in environments having colder water, and that it is hot water which is the unnatural state.

Ponder this for a moment. The earliest human migrations out of the African continent occurred roughly 130,000 years ago. Over the course of several millenia, humans extended their habitable reach throughout the Levant, Europe, Central Asia, Australasia, and eventually the Americas. Much of this migration took place during the Late Pleistocene Epoch which was dominated by glaciation that began about 110,000 years ago and ended between 10,000 and 15,000 years ago. In fact, our very own Lake Michigan is the result of this last great “ice age.” 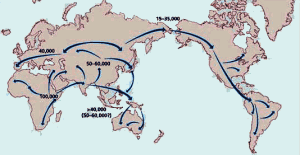 Other than geothermal phenomena such as hot springs and geysers, there were really no naturally occurring sources of hot water during this period. And given that these sources were quite limited and remote themselves, it is highly unlikely that the human species ever had much exposure to the type of water temperatures that we have become accustomed to during our morning “hot shower” routines.

Bottom line, whether it involved drinking it, bathing in it, or just simply traversing through it during the course of everyday locomotion, colder water was a constant throughout this era. And the early humans who survived this period were those who demonstrated the ability to flourish within this type of environment.

The key is to realize that, because of the luxuries of modern life, you live in an artificial environment that enables you to exist within a very narrow band of temperature ranges. However, your physiology is designed to accommodate much, much more.

Remember: you are built for survivability and durability – not for comfort.